The last 100 years have witnessed an explosion of technology as the industrial revolution progressed into the era of the consumer. Technology development windows continued to shrink while markets grew at increasingly faster rates than occurred in the past. But the power sector has not kept pace with other industries and has been neither a leader nor a fast follower of technology adoption.

The sector has maintained a natural reluctance to ‘jump’ into new technology without extended periods of testing and evaluation – sometimes lasting decades. But in the immediate period ahead, utility companies will need to completely change their approach to innovation and technology adoption or face becoming increasingly side lined as a series of transformative waves hits the sector.

The accelerating pace of change

A look back on various technologies that have appeared since the 1960s illustrates the slow pace of technology deployment among utilities. Whether automated generation control in the 1960s or advanced gas turbines in the 1980s, it took 15-20 years for utilities to widely adopt what was available in the market. Similarly, control and digital relays were available for system operations in the 1980s but again it took 15-20 years for this technology to widely take hold in the grid and network. Advanced metering rollout is still a long way off high penetration, both globally and on the island of Ireland, even after more than ten years of technology availability.

Contrast this pace of adoption to what has happened in new industries over the last several decades. While it took more than 55 years for telephony to achieve 50 million customers, it only took 18 years for personal computers, 15 years for mobile phones and ten years for the internet to achieve the same level of customer adoption. And consider the short time frames for various applications, games and novelty devices to reach similar levels. This now happens in single-digit years as technology-based product and application value is made available to consumers at internet speed.

Numerous technologies are emerging that could dramatically affect the future of the utilities industry and current costs. We focus on those that appear more likely to be commercialised within the next ten years and could have a widespread impact on traditional elements of power infrastructure. These technologies must be reviewed, with a look at both their economics and likely proliferation. The choice of these technologies is also supported by many of the findings of a study on the future of energy systems in Germany, Europe and the world by the year 2040, which included in-depth consultation with 80 recognised international experts from the energy sector and related industries. Of those technologies identified only small modular reactors are unlikely to be relevant in Ireland over the period in question. 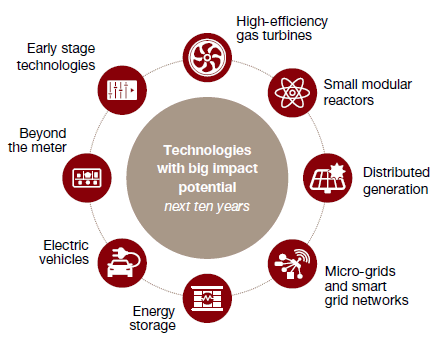 For utilities, this accelerated pace of change that comes with technological change is both an opportunity and a threat. As customers become more aware of technology possibilities that can provide useful applications in their lives, they are quick to seek out these offerings. Customers are not receiving their product and technology knowledge from their utilities; rather, they are obtaining information from non-utility sources on the internet, other customers and non-traditional entrants to the utility grid and customer businesses.

‘Losing touch’ – a future where utility companies lose touch with their customers as other players take control of the customer energy hub. Incumbent utilities provide simple delivery of wholesale energy at the cheapest price with an energy ‘hub’ performing all routine and value-added functions for the consumer.

‘Off grid’ – the centre of gravity shifts away from the main grid to onsite generation and storage as well as distributed generation attached to micro-grids. The grid becomes more akin to a source of back-up power and utilities face a number of dilemmas on what role to play in a more diversified power system and how to maintain underused and costly power infrastructure.

‘Mobile and virtual’ – electric vehicles become the norm, creating the need for substantial infrastructure investment and the opportunity to use vehicles as a mass storage source.

Local utility networks and circuits face tremendous strain. Utilities have the potential to capture several sources of value from this scenario but face considerable competition from a range of other players.

‘Data rich’ – ubiquitous, intelligent sensors collect energy flow and performance data across all levels of the network, and regulators require utilities to allow data access to third parties. Value shifts away from traditional utilities toward those who can collect, process, interpret, and convert these data to offer knowledge-based, value added energy management services to customers.

‘Scaled down’ – large business customers start to install their own decentralised and scalable generation for their own usage. As technology continues to progress, smaller and smaller commercial and industrial customers migrate toward a new era of ‘site-based’ generation. Traditional utilities see a diminished role with their larger customers and are not able to avoid disintermediation for their largest load entities.

Many of the technological developments add to the real threat of separation between utility companies and their customers. And when customers determine they are willing to consider or outright adopt emerging technology alternatives, they will seek out these products and services from wherever they can. If the sources of this information are those offering the technology or products themselves, rather than the utility, then disintermediation between the utility and its network and its customer is not long to follow.

Kim is the Energy and Utilities lead within the Consulting division of PricewaterhouseCoopers Ireland.  He is a Chartered Engineer and has over 15 years consulting experience with a proven track record in successfully delivering transformative projects in the sector.